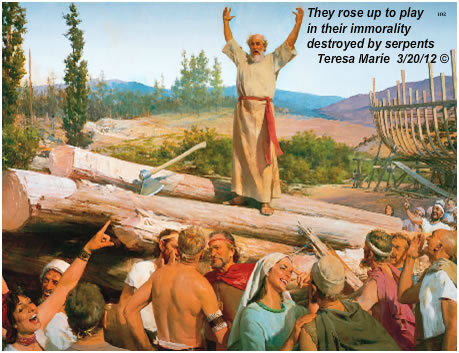 6 Now these things occurred as examples for us, so that we might not desire evil as they did. 7 Do not become idolaters as some of them did; as it is written, “The people sat down to eat and drink, and they rose up to play.” 8 We must not indulge in sexual immorality as some of them did, and twenty-three thousand fell in a single day. 9 We must not put Christ to the test, as some of them did, and were destroyed by serpents. 10 And do not complain as some of them did, and were destroyed by the destroyer. 11 These things happened to them to serve as an example, and they were written down to instruct us, on whom the ends of the ages have come. 12 So if you think you are standing, watch out that you do not fall. 13 No testing has overtaken you that is not common to everyone. God is faithful, and he will not let you be tested beyond your strength, but with the testing he will also provide the way out so that you may be able to endure it.