It’s been a scary week here in Israel!  Imagine if your city was under
attack by missiles and rockets—that’s what the children of Israel have been
going through the last several days!
Some crucial developments are unfolding right now of which God’s people
(Christians) in the nations need to be aware of so that they can pray.
Despite the Palestinian’s continued unilateral bid for statehood at the United
Nations over the last few days, an increase in terrorist missiles launched
from Gaza into Southern Israel hit several local schools and at least
one synagogue.
In an effort to reduce casualties, schools were closed for three straight days
in Southern Israel, affecting some 200,000 students.  Many of the schools
don’t have areas fortified against rocket attack.
The Israeli Iron Dome interception system has reportedly been mostly
ineffective to intercept Arab rockets.
Once the Arab’s mobile missile launching trucks strike, they simply move to
a new place, re-arm, and fire again.  Israeli Jewish citizens, young and old,
have only a precious few seconds to dive for cover. 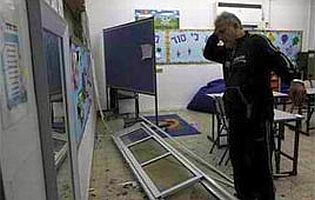 Ashdod school damaged by a Grad rocket
A few days ago, a citizen of Ashkelon, Moshe Ami, 56, died in a rocket
attack on the city.  Moshe Ami is survived by his four children and five
grandchildren.
Family members of our Bibles For Israel ministry staff also live in
this city.
One young girl was injured trying to flee from the missile attack in the city
of Ashdod, and a man in his 50s was reported injured from shrapnel in the
Gan Yavneh area attack.  Also, in both of these places our ministry
staff has family members.
A total of 16 people were reported wounded by rockets throughout the day,
according to Magen David Adom (Israel’s equivalent of the Red Cross).
Most were hit by missile shrapnel.  Another 14 were listed as suffering from
post-trauma anxiety.
Most of the residents of southern Israel were forced to spend the night in
bomb shelters.
Can you imagine all the people in your city staying in bomb shelters during the
day and night? 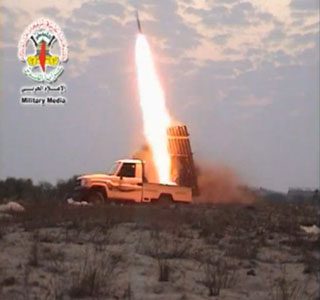 A vehicle-mounted multiple-launch rocket system recently
displayed by the Palestinian Islamic Jihad
Connection to Prisoner Exchange
On the weekend, Gaza received their first visit from the Egyptian
representative of the Muslim Brotherhood.  The purpose of his visit was to
congratulate the leader of Hamas on their ‘successful’ prisoner exchange
of the Israeli soldier Gilad Shalit.
Gilad Shalit, kidnapped five years ago by Hamas, was recently returned alive
to Israel in exchange for over 1000 Palestinian prisoners being held in Israeli
jails.  Many of the Palestinian prisoners were terrorists who murdered Israeli
civilian men, women, and children.
Since these Palestinian terrorists were released a torrent of missiles and
rockets have been launched at Israeli civilian populations.
Can you imagine missiles and rockets being fired from miles away
targeting your home, or the apartment building where you live? 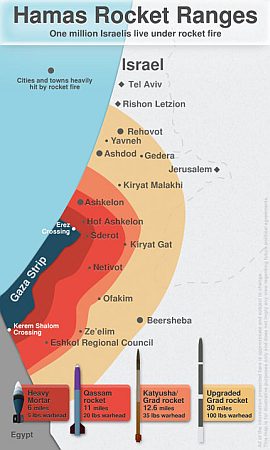 Israeli President Shimon Peres called the latest round of missile attacks from
Gaza on Israel nothing less than a “declaration of war” while speaking at the
dedication of a new medical college in the city of Safed, above the Sea of Galilee.
“Terror does not allow Gaza citizens to live normally….  I am telling our
[Arab] neighbors: You nor we want war.  But Gaza missiles are a declaration
of war,” the President said.
At the dedication of this new hospital facility, Peres noted that almost every
hospital in Israel includes Arab and Jewish doctors and nurses working side
by side to help heal both Jewish and Arab patients.
“If we can live in peace with the sick, why is it impossible to live in peace
when they are healthy?” he asked.
Ministry Writer’s note:  I can attest to the truth of his statement, having
given birth to my youngest son, Avi-ad, right alongside many Bedouin
and Arabic women in a Be’er Sheva hospital in Israel’s Negev.
Recently, while visiting my eldest daughter in a Jerusalem hospital after the
birth of her son, I noticed that the patients are a mix of Arabs and Jews,
and no one is given preferential treatment over another.
Both Arabs and Jews are treated equally with courtesy, kindness and
respect here in Israel. 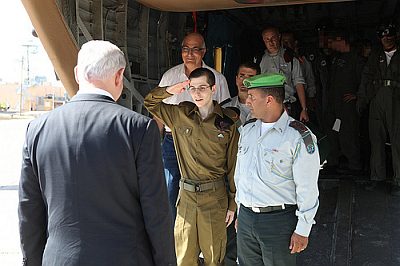 Netanyahu welcomes Gilad Shalit home after five years in captivity.
An Alliance against Israel is an Alliance against God
“‘Come,’ they say, ‘let us destroy them as a nation, so that Israel’s name
is remembered no more.’ With one mind they plot together; they form
an alliance against You.”  (Psalm 83: 4-5)
Hamas is not alone in utilizing terrorism against Israel; a variety of
terrorist organizations within Gaza are launching the rocket attacks.
Reports have it that President Mahmoud Abbas and his PLO organization
have also entered into an alliance with Hamas for the destruction of Israel.
Abbas began meeting last Wednesday night with the Fatah Revolutionary
Council in Ramallah, where he called on the council to consider dismantling
the Palestinian Authority.
We must never forget that this was the place where innocent Israeli soldiers
were brutally lynched several years ago, when they accidentally entered this
Palestinian Authority-controlled city.  Their Arab murderers proudly waved
their blood-stained hands for the crowd and the world to see their barbarism.
It is speculated that a new unity government will be formed between Hamas
and Fatah, for the creation of a unified Palestinian state comprising all the
separate Palestinian factions.
Some of the more radical Palestinian elements are growing impatient with
political maneuvers and just want to deal with Israel in the barbaric way they
know – violence. 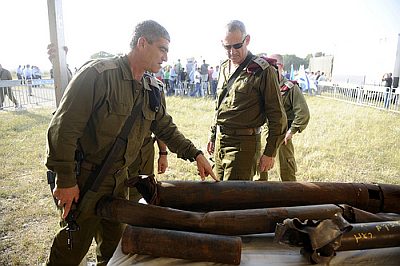 The IDF Chief of General Staff, Lt. Gen. Benny Gantz and GOC Southern
Command, Maj. Gen. Tall Russo look at some of the rockets that hit
Southern Israel this spring, when over 150 mortars, rockets and missiles
were fired by Hamas.  This week, Southern Israel is once again under fire.
Israel’s Enemies Armed with Sophisticated Weaponry
“Pray for the peace of Jerusalem, they shall prosper that love you.”  (Psalm 122:6)
As these missiles are launched speedily, one after another into Jewish towns
and cities, we ascertain that more sophisticated weaponry has been smuggled
into the hands of the Palestinians.
Hamas is now using rapid-fire, multi-round, mobile launching systems mounted
on the back of pick-up trucks, capable of shooting six or more rockets in
rapid succession.
President Obama has been authorizing the transfer of high-tech weapons to
Israel’s enemies.
Obama recently announced his intention to provide two up-to-date attack
helicopters (Textron Inc Bell AH-1Z SuperCobras) to Turkey.
This is being done with full knowledge of Turkey’s threats against Israel as
well as Turkey’s alliance with Israel’s sworn enemy, Iran.
This decision comes right after Washington’s recent announcement that they
plan to sell F-16s to Cairo, Egypt, a deal purportedly linked to the release of
American Israeli national, Ilan Grapel.
Considering that God promises to bless those who bless Israel and curse
those who do any harm to Israel (and history bears out this truth), the current
leadership in the White House is committing a serious crime against the Almighty. 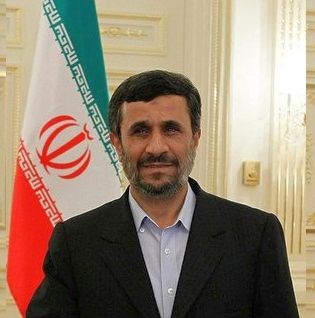 Iran’s president, Mahmoud Ahmadinejad, has repeatedly
threatened to wipe Israel ‘off the map.’
Iran: Israel’s Greatest Threat
Over 4000 years ago since the time of Abraham, all the counties which were
enemies or conquerors of Israel no longer exist, except one: Iran (Persia) –
the country in which the story of Queen Esther took place.
Though all the other enemy countries in the Bible no longer exist, Iran does
and poses a nuclear threat against Israel.
Addressing this threat in parliament, Israeli Prime Minister Benjamin
Netanyahu said this week, “A nuclear Iran will pose a serious threat to the
Middle East and the entire world, and it of course poses a direct and heavy
threat to us.”
On Wednesday, Israel tested a missile from Palmachim base in the
Mediterranean Sea, amid unconfirmed reports that Netanyahu was
lobbying his Cabinet to make a pre-emptive military strike against Iran’s
nuclear sites.
Iran’s nuclear program is considered such a threat that Britain is stepping up
their contingency plan for potential military action against Iran, the
Guardian newspaper reported Wednesday.
The U.S House also voted yesterday (Wednesday) to sanction Iran’s energy
sector, which funds Iran’s nuclear program.

Jewish children on their way to school in Israel on a safer day.
You Have a Part to Play
“For thus says the Lord of Armies: ‘For honor he has sent me to the nations
which plundered you; for he who touches you touches the apple of His eye.’”
(Zechariah 2:8)
We need to remember that God cherishes Israel, the apple of His eye, and
the enemies of Israel are the enemies of God.  (Psalm 83:5)
While all other nations in the world were formed by mankind, Israel is the only
nation formed by the will of God.
“For I will take you out of the nations; I will gather you from all the
countries and bring you back into your own land. … You will live in the land
I gave your forefathers; you will be my people, and I will be your God.”
(Ezekiel 36:24, 28)
Please pray that just as God caused confusion upon those united to build the
Tower of Babel (Migdal Bavel), which in Hebrew means the Tower of
Confusion, He will confuse the enemies of Israel, destroying their unholy
unity and preventing the building of a Palestinian state on Israel’s land.
We need you to cover the Israeli population in prayer and intercession.
“I will bless those who bless you.”  (Genesis 12:3)