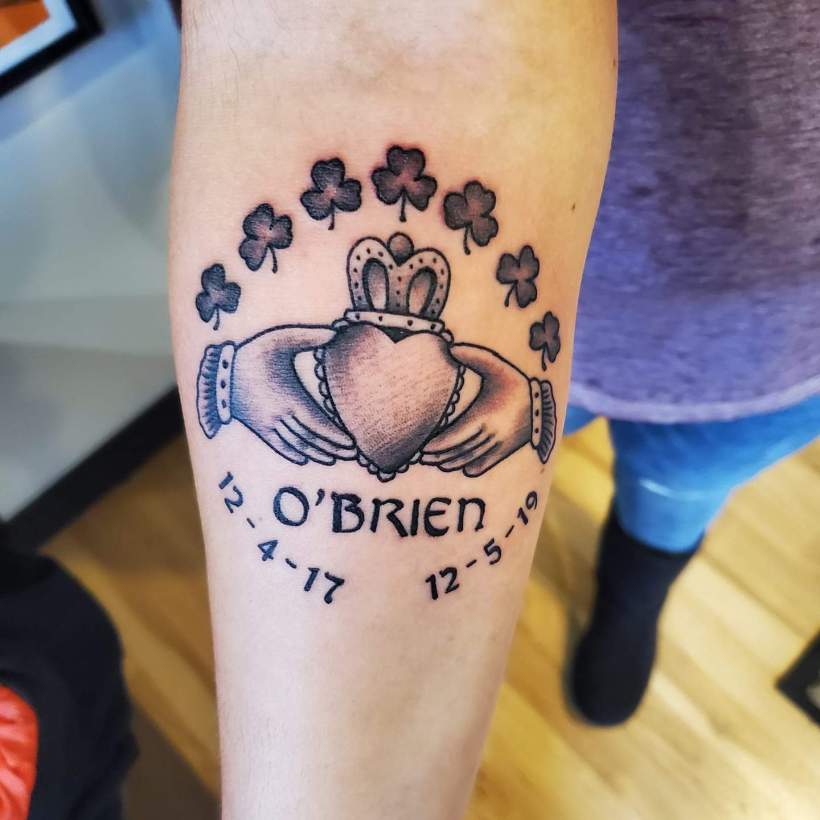 This is the tattoo that my eldest daughter just got in memory of my parents.  Dad died December 4th, 2017 and Mom followed 2 years and 1 day after on December 5th, 2019.  The 7 shamrocks represent them, myself and my 4 other siblings. O’Brien was my maiden name.  What a testament to her love of us all!
The center symbol is the Claddagh which holds a special place in the hearts of our family.  A little background for you:

The Legend of the Claddagh

The story of the Claddagh is based in rich Irish culture. It begins about five centuries ago in the fishing village of Claddagh, just outside the city of Galway. Men of the village, much as they do today, would go out to the sea, each day, to fish for food for their families and other villagers. The sea presented many dangers. On some days the sea was high and on others the current was strong. The greatest risk, however, was that there were pirates. On one such day, the story goes, a young man was fishing at sea with other men from his family. Suddenly, from their small boat, they spied a Spanish pirate ship. That sight, the men were certain sealed their fate. The pirates captured the men from Claddagh and brought them to the far off North Coast of Africa. It was there that they were sold into slavery for what they were sure would be the rest of their lives. Richard, the youngest of those captured, was the most distraught. All men had left loved ones behind, but Richard had just met his true love and now feared that he would not live to see her again. Years passed and several of the men died. Others accepted their fate. Richard worked as a slave, but continued to long for a return to his village and to his beloved. To keep his spirits up and to keep hope in his heart, each day Richard stole a tiny speck of gold from his slave masters in the goldsmith shop where he tended the fires. Years passed and, with his tiny pieces of gold, he was finally able to fashion a ring. It was his hope that, despite what seemed nearly impossible, he would return to his village and present the ring to his true love. No one really knows if Richard escaped or earned his release from slavery, but in either event, the day finally came when Richard could begin the long trip back to his village in Ireland . . . to his home. At his journey’s end, Richard was overcome with joy when he learned that his beloved had remained true to him in his long absence, waiting faithfully for him to return. It was on that day that Richard gave his beloved the ring he created that is now known worldwide as the Claddagh Ring. The Claddagh design appears not only in rings, but in other types of jewelry as well. The heart in the cladadgh symbolizes the love Richard longed to share with his true love. The crown symbolizes his undying loyalty and the hands symbolize friendship, which is, after all, the very foundation of love, with loyalty holding the two hands together. The Claddagh design became popular as an engagement or a wedding ring. It took on even more significance when Claddagh rings began to be worn widely by women throughout Ireland, on the west coast and the islands, where the claddagh may well have been the only major “investment” in a fishing family, an heirloom handed down from mother to daughter. 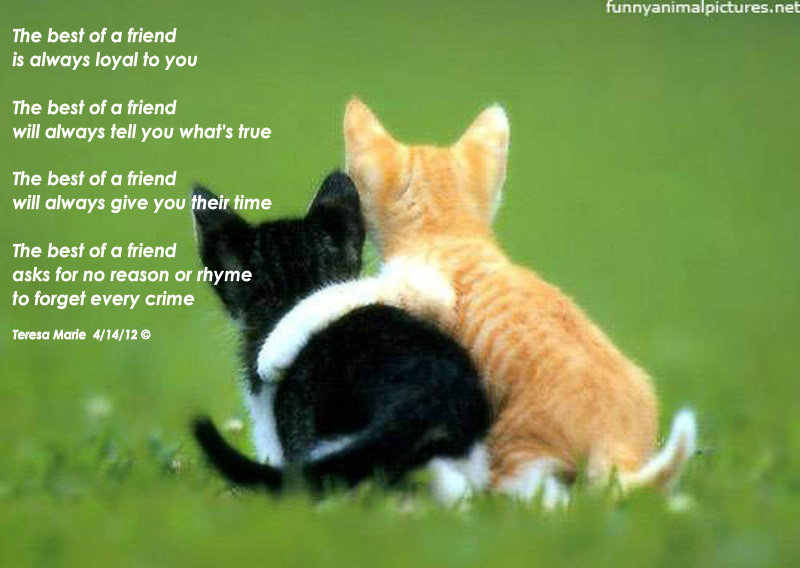 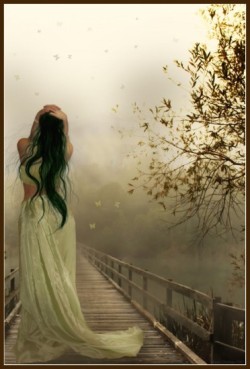 Where is the one
who will accept me
for who I am
not what they see?

Where is the one
if they don’t agree
will leave it alone
and let me be?

Where’s the one when
push comes to shove
that stands behind me
rising beyond and above?

Where is the one
when I’m thought of
who sees my quirks
as something to love?

Where is the one
with whom I’m free
to tell my secrets
and won’t betray me?

Where is the one
who’s the most truthfully
just as loyal as
I thought they’d be?

Is there not one
friend to the end
who over backwards
for me would bend?

Isn’t there one person
with whom I blend
so very well that
my life they’d defend?

If all these things
for them I’d do
should I not expect
the same then too?

Where is the one
that’s tried and true
and that does everything
that they promise to?

Dear God,  I pray
You’d bless me with one
good trustworthy friend
before my life’s done

And yet I know
if there are none
to be found on earth
You’re my fan # One!

For J~ with love!