He said “I love you”
And I felt it in my soul
“I’ll take care of you,
For that is a husband’s role”

“If you’ll marry me,
I promise not to leave you,
And as you will see
To never, ever hurt you”

“I do believe you”
Yet the words were hard to say
“I’m in love with you”
But my head screamed “Run away!” 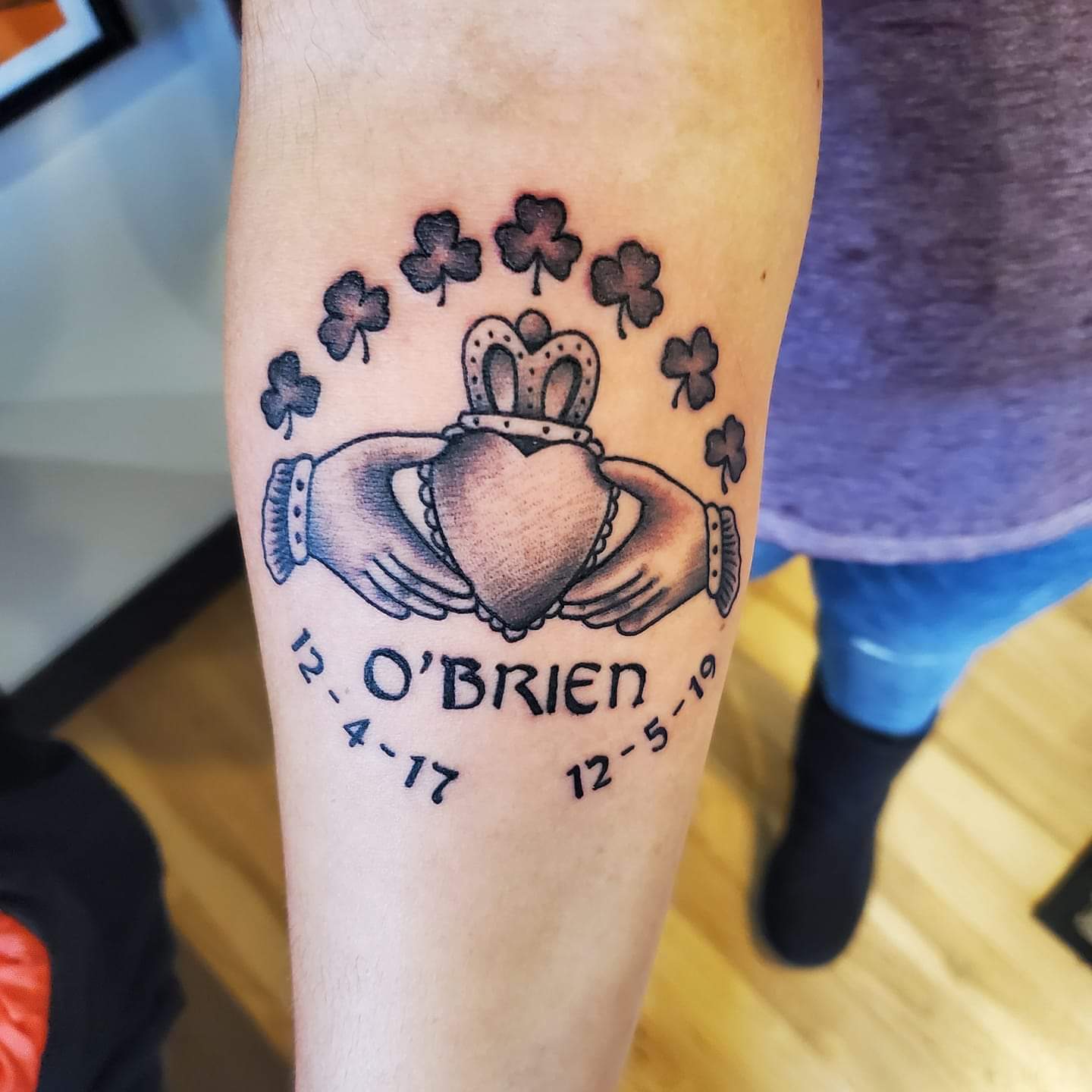 This is the tattoo that my eldest daughter just got in memory of my parents.  Dad died December 4th, 2017 and Mom followed 2 years and 1 day after on December 5th, 2019.  The 7 shamrocks represent them, myself and my 4 other siblings. O’Brien was my maiden name.  What a testament to her love of us all!
The center symbol is the Claddagh which holds a special place in the hearts of our family.  A little background for you:

The Legend of the Claddagh

The story of the Claddagh is based in rich Irish culture. It begins about five centuries ago in the fishing village of Claddagh, just outside the city of Galway. Men of the village, much as they do today, would go out to the sea, each day, to fish for food for their families and other villagers. The sea presented many dangers. On some days the sea was high and on others the current was strong. The greatest risk, however, was that there were pirates. On one such day, the story goes, a young man was fishing at sea with other men from his family. Suddenly, from their small boat, they spied a Spanish pirate ship. That sight, the men were certain sealed their fate. The pirates captured the men from Claddagh and brought them to the far off North Coast of Africa. It was there that they were sold into slavery for what they were sure would be the rest of their lives. Richard, the youngest of those captured, was the most distraught. All men had left loved ones behind, but Richard had just met his true love and now feared that he would not live to see her again. Years passed and several of the men died. Others accepted their fate. Richard worked as a slave, but continued to long for a return to his village and to his beloved. To keep his spirits up and to keep hope in his heart, each day Richard stole a tiny speck of gold from his slave masters in the goldsmith shop where he tended the fires. Years passed and, with his tiny pieces of gold, he was finally able to fashion a ring. It was his hope that, despite what seemed nearly impossible, he would return to his village and present the ring to his true love. No one really knows if Richard escaped or earned his release from slavery, but in either event, the day finally came when Richard could begin the long trip back to his village in Ireland . . . to his home. At his journey’s end, Richard was overcome with joy when he learned that his beloved had remained true to him in his long absence, waiting faithfully for him to return. It was on that day that Richard gave his beloved the ring he created that is now known worldwide as the Claddagh Ring. The Claddagh design appears not only in rings, but in other types of jewelry as well. The heart in the cladadgh symbolizes the love Richard longed to share with his true love. The crown symbolizes his undying loyalty and the hands symbolize friendship, which is, after all, the very foundation of love, with loyalty holding the two hands together. The Claddagh design became popular as an engagement or a wedding ring. It took on even more significance when Claddagh rings began to be worn widely by women throughout Ireland, on the west coast and the islands, where the claddagh may well have been the only major “investment” in a fishing family, an heirloom handed down from mother to daughter.

My idea of starting the new blog was not my best.  Even though my intentions were good, it hasn’t taken off and I still get more traffic here without making any new posts than I’ve ever gotten there.  Now I’m going to invite my few new followers to join us all back here on What About God?

So that I don’t bore them with old news and I allow you all to catch up, I’m posting the links for what you missed out on.

God bless and love to you all,

I haven’t seen many of you on the new blog yet.  Since I believe that some of you would care to know about the upheaval in & total destruction of part of my life, I am posting the links to my new blog posts.  I hope to see you visit me there.

Love, peace & blessings to all,

Hello my friends!  I have decided to close out this blog since it has been so long since I’ve regularly posted on it.

However, I have started a new one.  I intend to do a lot of the same genre as before but without stressing myself out so much about posting every day, nor joining so many other weekly challenges; poetry, storytelling, etc.

Sebastian is 3 now and attending pre-school for special education.  I have a lot of hectic activity already in daily life, that’s enough for me.

Stop by and say hi whenever you have time!

Love, peace & blessings for you all,   Teresa 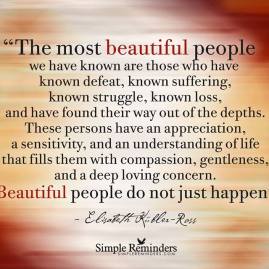 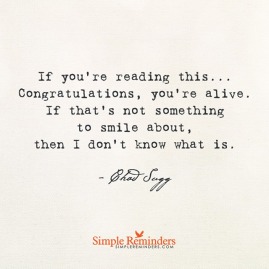 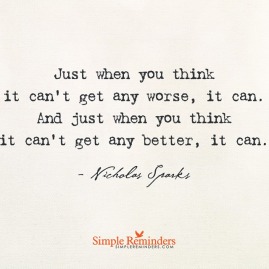 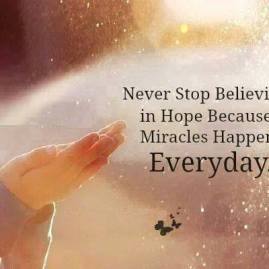 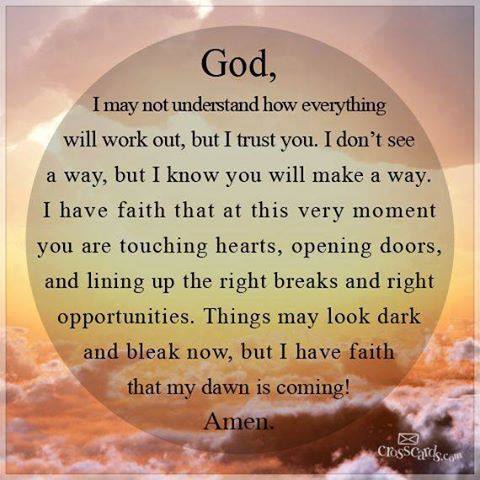 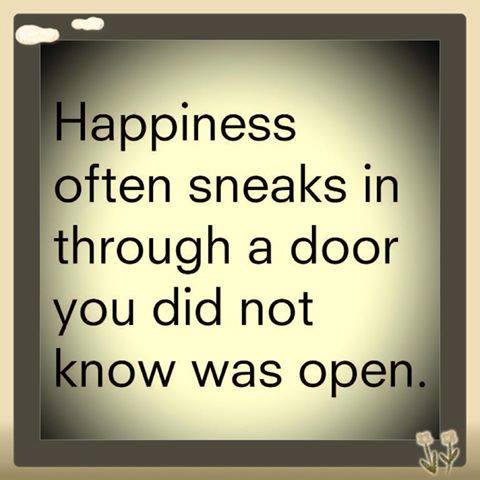 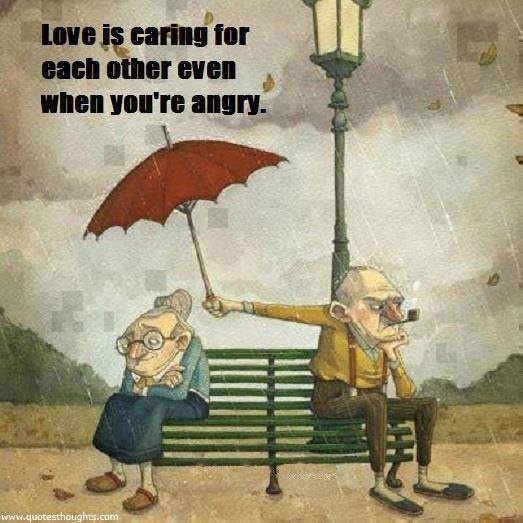 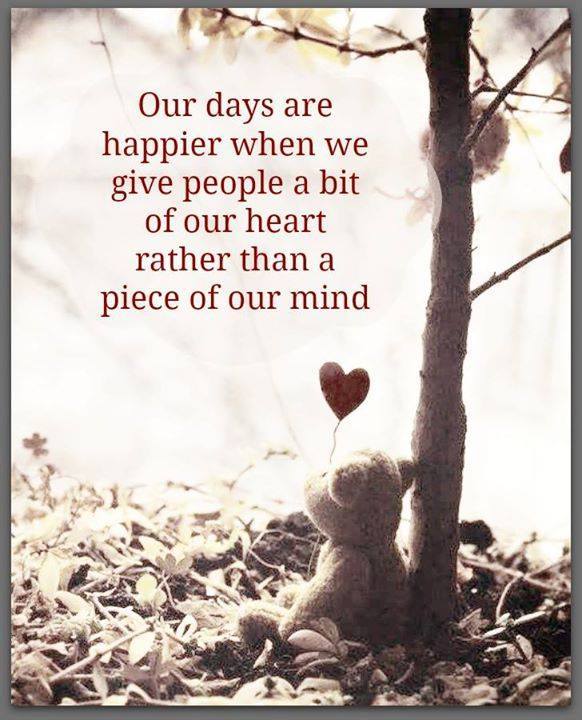 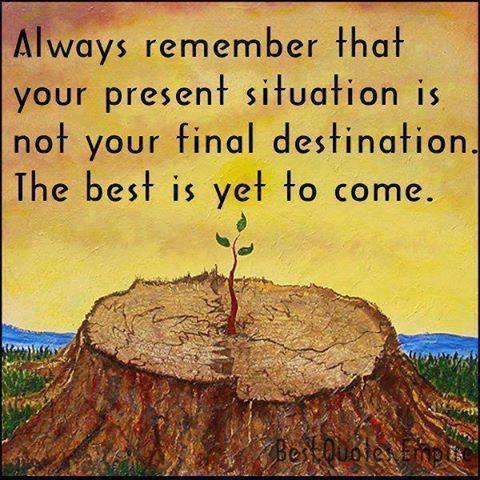 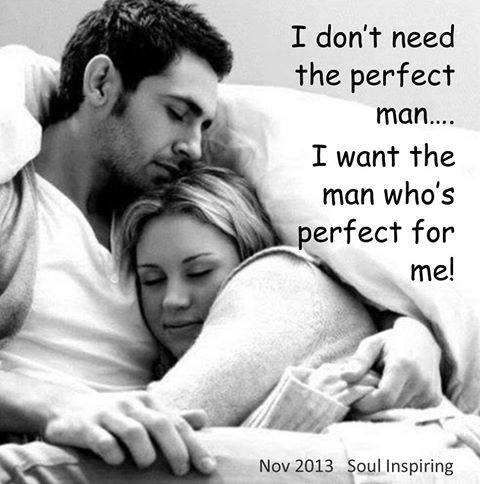 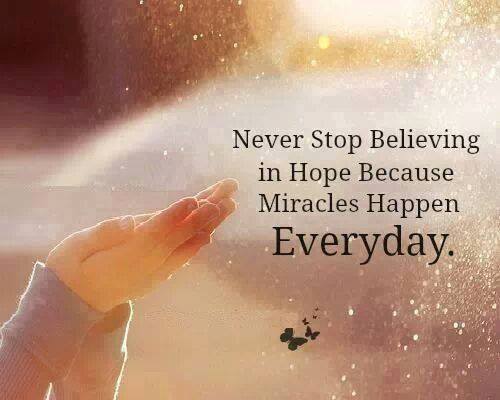 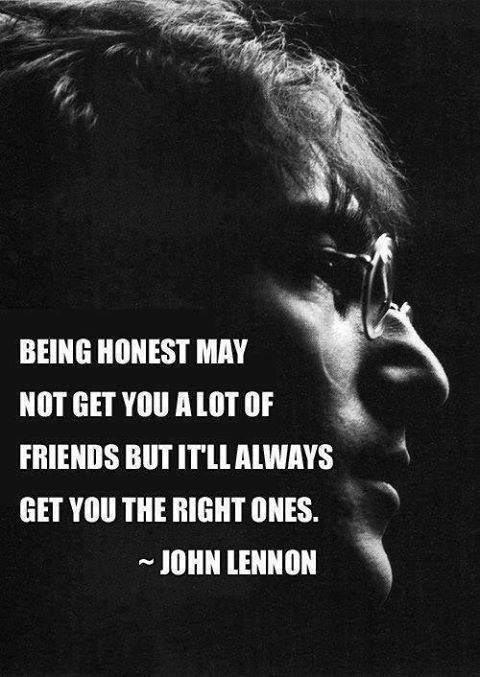 I don’t know how it happened; this post was supposed to go with the Spinning poem but ended up in my drafts folder instead, gee I wonder?!  lol!   Better late than never, right?

Yes, as you can see with my poem, I’ve finally hit the wall and suffered a stress fracture!  lol.  Actually I’ve been sick for 3 weeks now, or more, I can’t remember for sure the last time I felt good.

The doctor started Mark on the first option of med’s on the 15th.  I had to contact the on-call doc on Friday evening, after a nerve-wracking day of worry.  I told Mark on Thurs. evening that he looked rundown.  On Friday, he was real lethargic and just not himself.  I was getting ready to run get Sara after school  and went to tell him.  At first I couldn’t find him but then noticed the bedroom door was closed.  I yelled out that I was leaving and asked if he was okay.  He said yes, but I knew he was lying.  I opened the door and said so.  “How do you know I’m lying?”  he asked me.

“Mark!  We’ve just had our 8th anniversary, I know my husband better than he thinks apparently.  The only time you get away with doing it, like you just did, is ’cause I let you!  Good thing you don’t try it often.”

Looking closer at him, I noticed he was kinda ashy and his face looked like somebody had punched it, extremely swollen.  No wonder he had kept out of my sight for most of the day!  He said he was fine for me to leave him alone for 20 minutes.  I flew there and back.  Then he was back up and I saw how inflamed his whole body was.  Scared me to death!  I grabbed the phone and called immediately.

Long story short; I had to monitor his blood pressure over the weekend and if it got up to 160, take him immediately to the ER; he had to stop the new med’s; we couldn’t travel anywhere (which normally wouldn’t matter except my son was getting married 90 miles away!!!!!!)  All this occurred at 10:45 pm and I had to call him around 11:15 to tell him that I would not be able to come see him get married.  I was bawling my eyes out!  He said that he understood but I still heard the hurt in his voice.  Then I had to call my eldest daughter to tell her that I would get Sara out there to ride with her but Mark & I would not be going.  At first she was dead silent and I burst out bawling all over again.

“I don’t know what to say mom, I’m sorry.  Did you call Blaine yet?”  “Yes”  “What did he say?”  “He understood”  “I’m sure he does”  “I still know he’s hurt”  “I’m sure he is!  I don’t want this to sound mean, so please don’t take it that way but I’m just talking from the other side of the coin here.”  (I already had an idea what was coming)  “What?”  “I just really sucks to be your kid sometimes.  It was already bad enough before with you always being sick so much, but now with Mark too, that’s just that much more stuff you will miss out on being there for!  Look at all the things you’ve already missed.”  Bawling more, “I kn-know but I c-c-can’t help it!”  “WE ALL KNOW THAT, MOM!  We don’t blame you at all, that’s what I meant when I said that it sucks being your kid.  You know I wouldn’t trade you for anything in the world!!  Mark either, we all just wish you weren’t sick.”  “How do you think I feel?!”

I told her that I thought about getting someone to come stay with him while I was gone but there’s no way I could do that and not be a basket case the hold time I was gone, just the worry alone would ruin the whole day for me and I didn’t want to be a downer to the celebration.  Could you just imagine if I had gone 90 miles away and got a call saying “We had to take Mark to the hospital?”  I’d probably kill myself just trying to get home fast enough, not to mention the worst case scenario.

Everybody understood, Mark said to go anyway, of course that didn’t happen and now I have one more guilt to live with concerning my children 😦  I am trying my hardest to brush it off but it’s not working well enough to keep my depression in check.  I hit that Saturday night.

NOTHING I CAN DO ABOUT ANY OF IT!!!!  I know this, they know this, God knows this, easier said than done too.

I used to ask God why I had to go through all the abuse and crap with Sara’s dad, what He was strengthening me for?  How strong did I have to be in the future?  I wasn’t sure I wanted to be around for it.  Today, I think I know why, it was a stress tolerance exercise!

I’m trying to keep busy and occupy my mind as much as possible but with being sick so much it’s not easy.  I did want to share with you the latest things that I’ve been working on.  They could be better but I think I’m still doing pretty good for only starting back in November or so of last year, don’t you?  I find that I can do the sculpting better than the canes because, with them, you have to be able to apply equal pressure with both hands during construction and then again when reducing; for me with the MS, that’s impossible.  Therefore, the pattern is never straight in my canes 😦  Oh well, I am having fun with these characters anyway.

Thanks to you all for those thoughts, prayers and words of encouragement!!  I couldn’t do it without your support.  Forgive me being negligent with the updates.

Love, hugs and blessings to all,  Terri 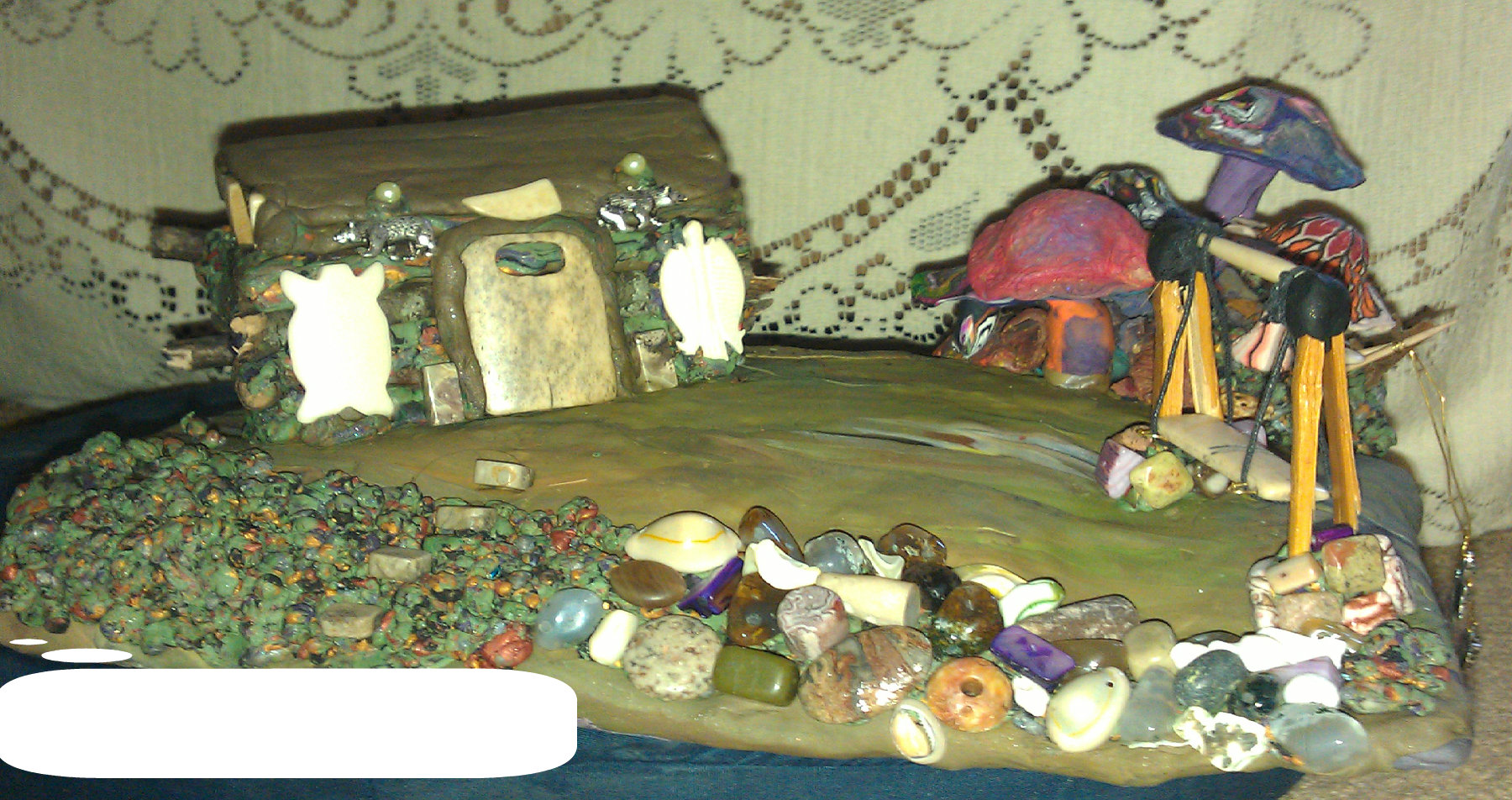